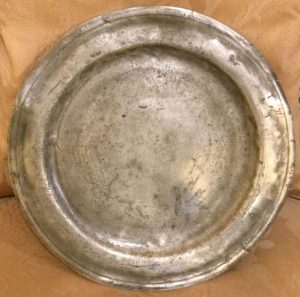 Pewter Ware was in common use (for thousands of years) until the early 19th century.  In fact it wasn’t until the reign of Charles II that silver plates became fashionable.

About 25 years ago one of our board members, Rosemary, bought this pewter plate at a garage sale for 25 cents thinking it would be perfect to use under a house plant.  It served this purpose for quite a while before being replaced with a less ‘rough’ looking substitute.

“I came across it (the plate) recently and decided to show it to Dan Bruce, our Curator for Fintry Manor House.  He asked if he could keep it and saying “Yes” he explained it’s history. The letters stamped on the rim identify the owner. The plate would be kept on a rack behind a Pub bar.  I understand this would be the same for a beer mug.  When the owner came in for lunch or a meal he had his own utensils.  This plate goes back to the ’17th’ Century.”

All donations are welcome, and go directly to the maintenance of the Fintry Estate, along with the Dun-Waters collection. DONATE NOW

There are over 200 Friends, mostly from the Okanagan Valley but some come from as far away as California and Scotland.
JOIN US

Sign up and get exclusive news and updates delivered to your inbox.

Funded by the Government of Canada